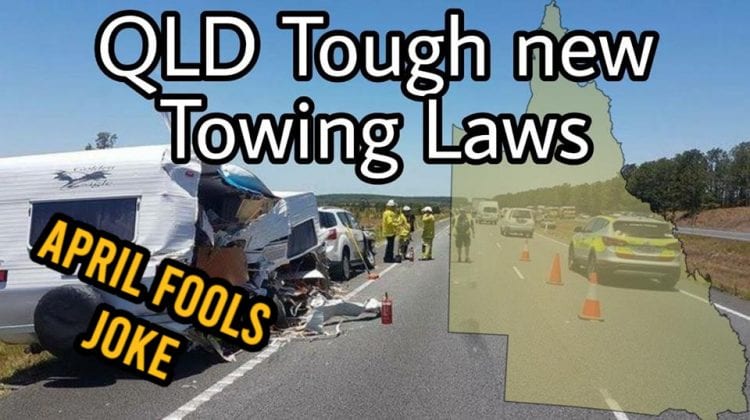 On the 1st of April we made a bit of a haha facebook post about QLD introducing a towing licence, and at this stage, it is still being shared around, quoted, misquoted, shared again, copied, pasted, and spread as news. Seems no matter how much we had a laugh in the comments with people, and how much we corrected people, no one read the comments (and still aren’t!) and it’s being shared and shared and shared!

It went a tad more viral than we intended, not that it’s a bad thing, but certainly a fair few people missed the message that it was an April Fools Joke, but not everyone thought that the joke was warranted. Many seemed to resonate with the idea, and think that far from a joke, it should be implemented as an actual thing.

For those that missed it, here is the actual post:

As you can see by a lot of the comments, people really seem to think this is a good idea, and in some ways we do too, but we’d like to hear what you have to say, where would you draw the line?

One of our thoughts is to follow some of the rules set out in Vehicle Standards Bulletin 1, which governs light trailers up to 4,500kg. Now it states that after 750kg you need Brakes (Not Breaks by the way, one of my personal biggest pet peeves on Facebook), now once you start adding brakes, especially the most common being cable or hydraulic override, the handling characteristics of the vehicle and combination change dramatically (Note, still talking override brakes here, which are good from 0kg up to 2,000kg)

For those that don’t know how override brakes work, you have a shaft that your tow hitch is attached to, and this pushes back on either a cable or hydraulic cylinder and applies the brakes, the only downside means that the trailer has to physically push against the car in order to get the brakes working, so that means that if your car/ute is a little on the light side, it can easily start to push you before the brakes come on enough.

These are generally good as farm trailers, cart stuff to the tip trailers, maybe get the motorbikes out to the track trailers, but really, once you start looking at a 2,000kg trailer (Remember, breakaway systems only required in excess of 2,000kg) being towed by a 1,950kg ute, then things start getting a bit dicey.

Another one that we have seen is Braked Trailers not being set up correctly, some people have towed before, and generally a 750kg Unbraked or a 750-2,000kg Override trailer, and so they set their caravan or car trailer up so that they still feel a “shunt” when they hit the brakes, this often means (not in all cases though) that the brake proportion to the trailer is terrible, it’s biased towards the car, meaning that downhill or in wet and slippery conditions, the application of the brakes can easily unbalance the car and cause a catastrophic incident.

Then you have load bias, a lot of people don’t know how to load their trailers, and this doesn’t matter if it is a car trailer, caravan, horse float, or a tiny home on a trailer, load distribution is a massive issue, and depending on where your load is can really affect the handling, check out this video for some explanation:

As you can see the location of the weight means a LOT to the stability of the trailer, and I know some people sitting at home are thinking “Well Duh!” but back up, you weren’t born knowing this, I wasn’t born knowing this, no one is born knowing this, and we can say “Educate yourselves!” and “Don’t tow if you don’t know!” but hang on, who is educating these people? Is the education the same across the board?

I mean, what do we know that Betty and Jim who did the Tow-Ed Course (One of the better courses out there, not an endorsement, but it’s a damn fine course, I personally know a few people that have done it) are at the same standard as Steve and Jenny who did “Outback Bob’s Trailer Reversing and Skills Course”

Without knowing the qualifications, experience, and subject matter that “Outback Bob” teaches, especially when compared to something like Tow-Ed or Getabout then you really have no idea what people know, don’t know, and how safe they’ll be on the road.

Another thing is are the correct skills being taught to correct an issue with a trailer? Skid Pans are dotted all over Australia, and it’s fairly easy to make up a mock caravan, hook it on the back of a car that has a roll cage, harness, and you slap on a helmet, go out and crash the caravan until you are confident towing it. They do this with learner drivers in some countries, and they even go so far as to crash the cars.

Why can we not do the same here?

Lastly, I’ll leave you with this parting video, please, jump in the comments and debate how this guy could have saved it better.

So please, answer us in the comments below:

Growing up in Rural NSW, Scotty loves to get out and see the world, go offroad, find a good place to camp and drink a beer and have a BBQ in the Wilderness. Currently driving an LDV T60 with a few mods, Scotty is passionate about EV's and wants to own a Rivian R1T one day.